The Sudarium of Oviedo and what it Suggests about the Shroud of Turin? 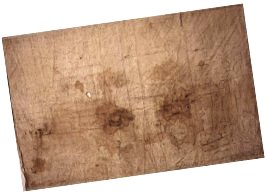 In the northern Spanish city of Oviedo, in a small chapel attached to the city's cathedral, there is a small bloodstained dishcloth size piece of linen that some believe is one of the burial cloths mentioned in John's Gospel. Tradition has it that this cloth, commonly known as the Sudarium of Oviedo, was used to cover Jesus' bloodied face following his death on the cross.

Numerous historic documents tell us that the Sudarium has been in Oviedo since the 8th century and in Spain since the 7th century. It seems, too, to have arrived from Jerusalem. Documents from the late Roman period and the early Middle Ages are often sketchy and prone to chronological mistakes, and those pertaining to the Sudarium are no exception. But from a multiplicity of sources, scholars have extracted core elements of historical certainty and plausibility sufficient for a fair degree of historical reconstruction.

We can be quite sure that the Sudarium came to Oviedo from Jerusalem, and there is some evidence it dates back to the 1st century CE. Its journey to its present location began in 644 CE. when Persians under Chosroes II invaded Jerusalem. To protect the Sudarium, it was moved out of the city to safety. We are uncertain of its route to Spain. It may have been first taken to Alexandria along with numerous other relics (real or otherwise, and stored in a chest or "ark") and from there, in succeeding years, along the coast of North Africa ahead of advancing armies. Some historians have suggested a more direct sea route to Spain, but forensic pollen evidence indicates that the Sudarium was in North Africa, just as the presence of other pollen spores evidences that it was at one time in the Jerusalem environs. Whatever the route, we know that after it arrived in Spain, it was kept in Toledo for about 75 years. For some time after it arrived, it was in the custody of the great bishop and an early-medieval scholar, Isidore of Seville. Then in 718, to protect it from Arab armies, which had invaded Spain only seven years earlier, it was moved northward with fleeing Christians. In 761, Oviedo became the capital of a northern, well-defended enclave of Christians on the Iberian Peninsula and it was to this city that the Sudarium was brought for safekeeping. It has been in Oviedo ever since.

The path of the Sudarium links its origin to the same time and place of the Shroud. Moreover, forensic analysis of the bloodstains suggests strongly that both the Sudarium and the Shroud covered the same human head at nearly the same time. Bloodstain patterns show that the Sudarium was placed about the man's head while he was still in a vertical position, presumably before he was removed from the cross. It was then removed before the Shroud was placed over the man's face.

In 1999, Mark Guscin, a member of the multidisciplinary Investigation Team of the Centro Español de Sindonología, issued a detailed forensic and historical report entitled, "Recent Historical Investigations on the Sudarium of Oviedo." Guscin's report detailed recent findings of the history, forensic pathology, blood chemistry, and stain patterns on the Sudarium. His conclusion: the Sudarium and the Shroud of Turin had been used to cover the same injured head at closely different times. Here are some highlights from Guscin's report:

It seems to be a funeral cloth that was probably placed over the head of the corpse of an adult male of normal constitution. The man whose face the Sudarium covered had a beard, moustache and long hair, tied up at the nape of his neck into a ponytail.

The man was dead. The mechanism that formed the stains is incompatible with any kind of breathing movement.

The man was wounded before death with something that made his scalp bleed and produced wounds on his neck, shoulders and upper part of the back.

The man suffered a pulmonary edema as a consequence of the terminal process. The main stains are one part blood and six parts fluid from the pulmonary fluid.

The only position compatible with the formation of the stains on the Oviedo cloth is both arms outstretched above the head and the feet in such a position as to make breathing very difficult, i.e. a position totally compatible with crucifixion. We can say that the man was wounded first (blood on the head, shoulders and back) and then 'crucified.'

On reaching the destination, the body was placed face up and for unknown reasons, the cloth was taken off the head.

The Sudarium contains pollen grains of Gundelia tournefortii, identical to that found of the Shroud that grows only east of the Mediterranean Sea as far north as Lebanon and as far south as Jerusalem.

The blood (stain symmetry, type and other indicators) on the Sudarium matches the blood on the Shroud.

There are many points of coincidence between all these points and the Shroud of Turin - the blood group, the way the corpse was tortured and died, and the macroscopic overlay of the stains on each cloth. This is especially notable in that the blood on the Sudarium, shed in life as opposed to postmortem, corresponds exactly in blood group, blood type and surface area to those stains on the Shroud on the nape of the neck. If it is clear that the two cloths must have covered the same corpse, and this conclusion is inevitable from all the studies carried out up to date, and if the history of the Sudarium can be trustworthily extended back beyond the fourteenth century, which is often referred to as the Shroud's first documented historical appearance, then this would take the Shroud back to at least the earliest dates of the Sudarium's known history. The ark of relics and the Sudarium have without any doubt at all been in Spain since the beginning of the seventh century, and the history recorded in various manuscripts from various times and geographical areas take it all the way back to Jerusalem in the first century. The importance of this for Shroud history cannot be overstressed.